As a kid I never really found sci-fi appealing. I was raised on fairytales so fantasy was my natural first choice as far as genres go. When I was about eight years old I discovered I liked horror as well and to this day, those two genres are what I constantly look for regardless of medium. What they have in common is that there are elements of the fantastic in them – supernatural beings, magic, and everything that humans can’t create or become.

Sci-fi (or at least the common notion of it) is about technology, steel, everything artificial and fabricated. Even when it deals with distant worlds, it is nothing unreachable. No matter how out-of-this-world the stories are, they are still grounded on science. And science is what humans do so I never saw it as anything special. It wasn’t until a few years ago when I got to read this comic book series called Saga that I became more interested in the genre.

Written by Brian K. Vaughan and illustrated by Fiona Staples, Saga is about as sci-fi as you can get. It is a true space adventure spanning an entire galaxy. It has all manner of life forms from people with horns and wings to biomechanical robots with TVs for heads to large cats that can tell when you’re lying. It is a reality where space bounty hunting is a lucrative career path and spaceships are a common form of transportation; so common that they literally grow on trees. There’s even an entire planet that deals in interplanetary sex trade and a giant flaming gorilla (because why not?). 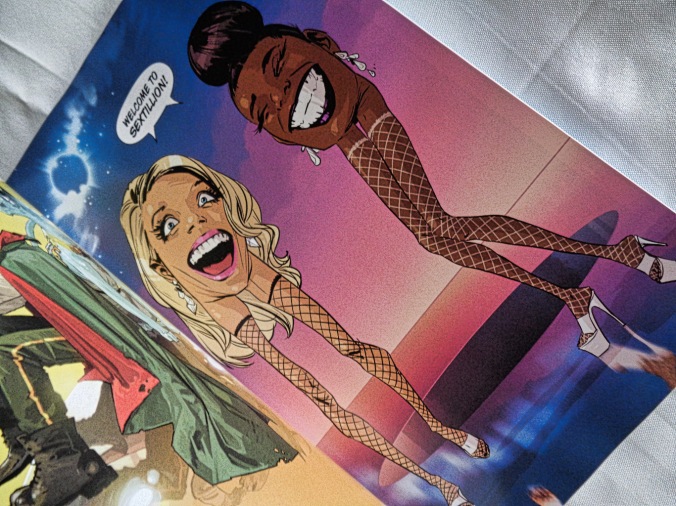 So what makes Saga any different from other sci-fi stories? Well, BKV wrote it, that’s what. Like Vaughan’s other works, his character development for Saga is top-notch. First he lets you fall in love with protagonists Alana and Marko, who got into a forbidden relationship in spite of being from rival races that are locked in an endless war with each other. Despite their biological differences, they actually end up having a baby and get chased throughout the galaxy for it (hence the space adventure). 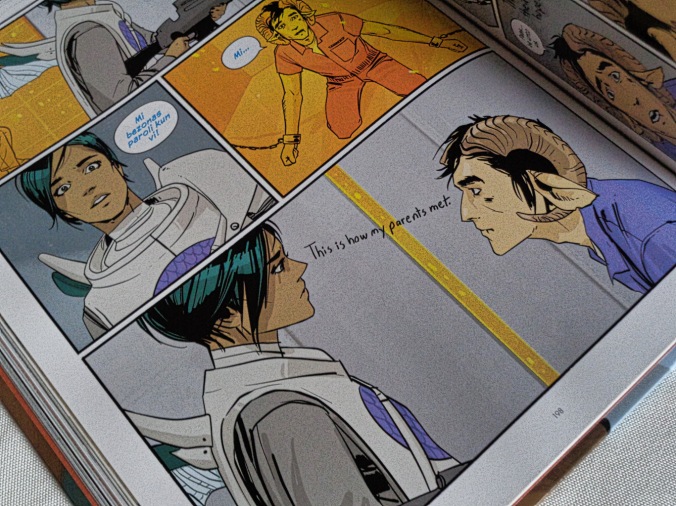 Then, Vaughan introduces you to their would-be captors: a bounty hunter named The Will and his trusty sidekick Lying Cat. You’ll end up liking them, too, just because they’re a cool pair. There will be parts where you want the protagonists to get away, but at the same time you also end up worrying about what happens to the bounty hunters. It feels like the good guys are good guys and the “bad” guys don’t seem so bad so part of you roots for them, too. And that’s one of the things I enjoy about this story – even the bad guys are likeable.

Oh, and then there’s Prince Robot IV. He’s a bit of a douche but he does make the story that much more interesting. I guess you can say he’s the main bad guy of the story.

Beyond all the weird elements of sci-fi, Saga is packed with humor, action, serious and heart-felt moments, great characters and so much more. This series made me realize that genres aren’t always what make stories enjoyable, and that the best stories are the ones that are able to transcend those delineations anyway. It’s no surprise that Saga is what many believe to be the best comic book on the shelves today. And if you know comic book fans, you know that that compliment isn’t something that gets thrown around lightly. This series really does live up to its hype.