Last week, Image Comics released book one of A.D.: After Death, a three-part sci-fi spectacular that could easily be the best comic book series released this year. This also happens to be the work of two of today’s top comic book talents, with multi-awarded Scott Snyder writing the script and the equally talented Jeff Lemire providing his signature style of art in full color. Both creators have separately done terrific work in the science fiction genre, so there was no way I was going to pass up this masterpiece.

A.D. explores a world where the human race finally found a cure for death. The story follows Jonah Cooke, who seems just about as average as the next guy, except he has a habit of stealing things. 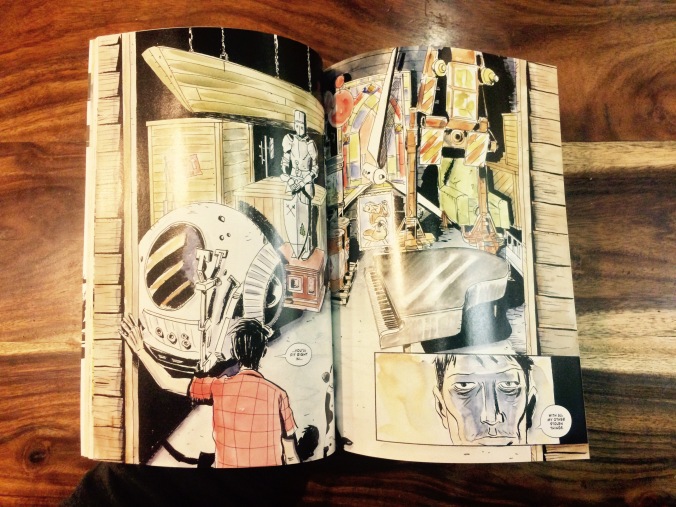 It’s gotten so bad that he even stole a cow on his last day at work.

Other than that, not much is known about the protagonist’s current situation, although the story does go back to his childhood several times. These flashback scenes are more text-heavy, allowing more room for storytelling.

Snyder’s writing is thick with emotions, adding a lot of depth to the story.

And as good as his prose is, you’ll equally enjoy Lemire’s art, which dominates the comic book’s future scenes.

What makes the comic even more enjoyable is that it is presented in large format, so it is actually much bigger than your usual comic book – perfect for showcasing Lemire’s art. Overall, the first book is a solid opening issue, giving you a glimpse of what a deathless future is like, while allowing you to get to know the protagonist just enough to make you want to know more. I’m definitely looking forward to the next two issues.