I’ve never actually read anything by H.P. Lovecraft. I’m definitely planning to, being a horror fan and all. But everything I know about Lovecraft’s works, I know from the authors he inspired – and there are plenty. If the horror genre was a crime scene, you’d probably see about as much of Lovecraft’s fingerprints on it as you would Bram Stoker’s. Here’s one Lovecraft-inspired book that makes me want to read H.P.’s notoriously weird tales. 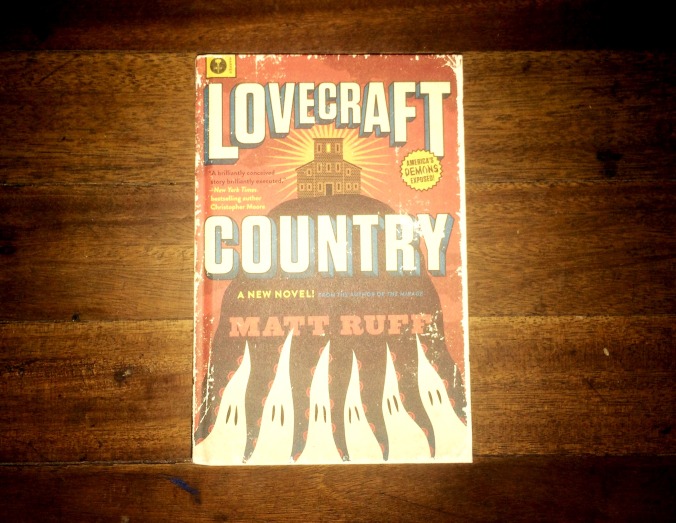 Set in the 1950s, during the twilight years of the Jim Crow era, Lovecraft Country follows 22 year old Atticus Turner as he investigates the case of his missing father. Accompanied by his uncle and his childhood friend Letitia, Atticus sets out to follow his dad’s trail, only to get tangled up in a cult ritual. As he witnesses some unearthly events unfold, he soon realizes that racists aren’t the only demons living in America.

Lovecraft Country is one of the most enjoyable horror books I’ve read. I always found stories about cults extra creepy for a number of reasons. We know these groups actually exist, and that in itself is quite unsettling. Then there’s the idea that they study the occult, and that they do rituals to communicate with or actually bring forth entities from beyond our realm. (Honestly I’d rather not know what they’re doing.) Cults represent a tangible sort of evil, and in horror, the closer you are to the threat, the scarier it becomes.

What I really like about the book is the way Matt Ruff tells the story. Each chapter is like an episode of the Twilight Zone wherein you get a creepy stand-alone tale. As the story progresses, you’ll see how each of these mini stories converge to form a delightful tapestry of horror. And then there’s the social aspect of the book. It’s quite clear that Ruff intended to shed as much light on racism as much as he wanted to write about the supernatural. There are several elements in the story that are based on how things were in 1950s America, and I feel like the author gave a good depiction of what a lot of people went through during that era. Apart from being an exceptional work of horror, this book is a brutal reminder that men are more than capable of being monsters, too.