I’m a hundred pages into my fifth novel for the year and it’s been an interesting ride thus far. We are the Ants by Shaun David Hutchinson is a sci-fi novel about a teenage boy named Henry Denton whose seemingly average life is disrupted by a series of alien abductions. He has no idea why he was chosen. All he knows is that the aliens have given him 144 days to decide whether or not he wishes to save mankind from an unknown catastrophe that will destroy the planet. All he has to do is press a shiny red button and everything will be okay.

To most people, the choice seems to be an obvious one. But for sixteen year old Henry, it’s not exactly black and white. His boyfriend just recently committed suicide. His grandmother is suffering from Alzheimer’s disease and is slipping further and further by the day. His relationship with his chain-smoking mom is going south. His dad left them a long time ago. His brother just got his girlfriend pregnant and dropped out of college. And the popular boy at school who makes fun of him when everyone’s looking and secretly makes out with him when they’re alone only complicates the equation. Beyond his personal life, world events haven’t been encouraging either, with rising tension between nations that are overly eager to jump-start a nuclear war. 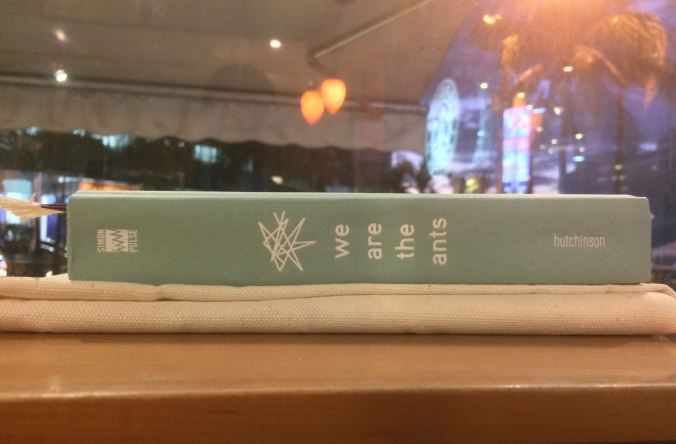 When everything’s falling apart, is the world really worth saving?

The book invites us to examine this question. And as you read along, you realize that the answer really isn’t as simple as you thought it would be – especially for Henry Denton.

I like how the book is both human and alien (literally and figuratively). One moment, Henry is struggling with every conceivable problem a high school kid can have. Next thing you know he’s immobilized on a slab inside a spacecraft for God knows what reason. The guy just can’t get a break.

What makes the book entertaining is its breadth. It gives you ample doses of genuine human struggle while having a compelling sci-fi spin. It challenges you to question the value of life and our existence as a species. It urges you to find meaning in our daily struggles. It makes you wonder what the point of living is, or if there is a point at all. It encourages you to ponder the infinite vastness of the universe and what role we’re supposed to play in it. The book gives you so many things to think about, and that’s always a good thing. I’m really looking forward to the remaining 350 pages.